Sadly I found out last night that a beautiful mature elm tree in the grounds of Brighton College is under threat.  Is it diseased?  Is it about to fall over?  Is it shedding branches and putting people at risk?  No.  It’s in the way.

Brighton College is redeveloping its campus to update its facilities and cater for increasing demand, and it has submitted a planning application which will be debated and voted on at the City Council’s planning committee this afternoon.  The College has an impressive number of supporters listed on the application, although the addresses suggest these are mainly from staff and students’ families’.  Local residents have voiced a number of concerns:

 Overdevelopment of an already crowded College campus
 Loss of light and space taken from residents
 The Old Music School is a heritage asset of national historical and cultural significance
 The height of the building is out of keeping with nearby homes
 Noise pollution from the construction process and heavy vehicle and machinery operation
 Loss of privacy from more students, parents and their cars, and the coaches that park along Sutherland Road for lengthy periods causing pollution.
 The development will enable an increased pupil capacity which will exacerbate existing traffic problems
 The loss of the Elm tree is unacceptable 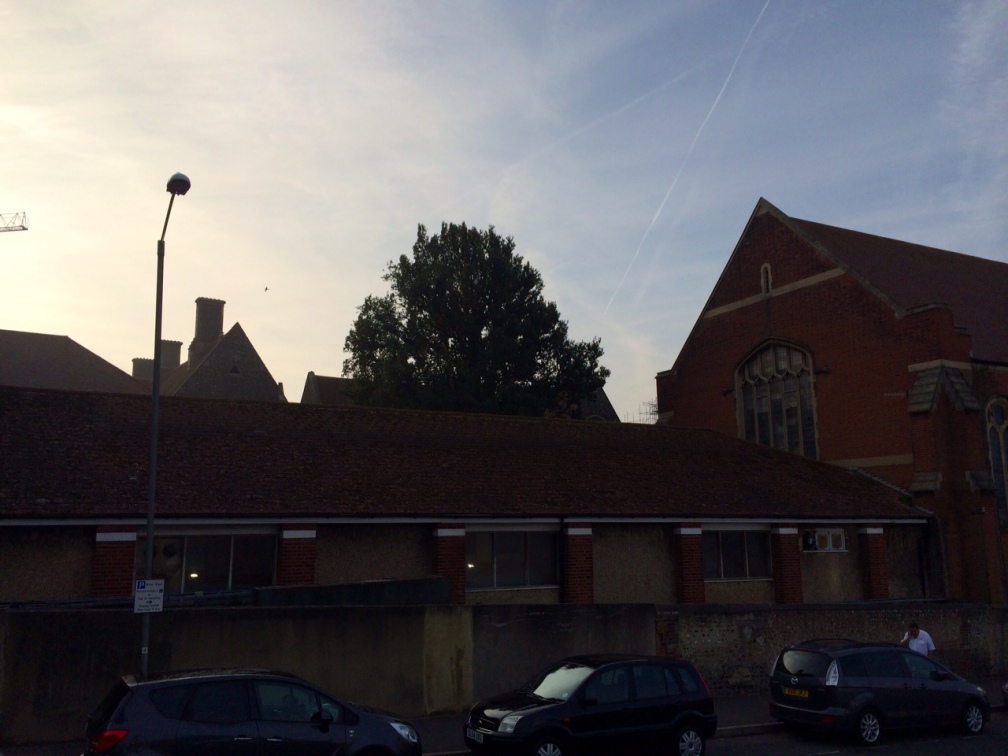 The view from Sutherland Road. The elm is in the middle and the Old Music School is in the background behind the lampost

So what’s the problem?  Isn’t it just a tree?

No, it’s an elm tree, indeed it looks very much like a Wheatley Elm, one of the rarest species of tree in the country.  Apart from a number of them in Edinburgh and a handful in Scarborough and Eastbourne, Brighton & Hove is the only place you’ll find one.

Elms were once common in the British Isles, and were especially popular urban trees due to their majestic stature.  However Dutch Elm Disease wiped out the vast majority of them in the 1970s and 80s, a total of some 25-30 million trees.

Brighton & Hove was lucky.  Not only did it have a unique protective shield against the disease in the form of the South Downs and the sea, it also had a number of people in the local authorities (including Brighton Council’s Rob Greenland) with the foresight to put in place an effective strategy to combat the disease.

The work paid off.  Brighton & Hove now has the finest collection of elms in the country, called the National Elm Collection due to its importance to the nation.

But we’re not out of the woods yet.  A BBC Newsnight feature in 2010 highlighted the continued threat to the elms, and more recently the Brighton Argus has reported new outbreaks of the disease in the city in October 2012 and July 2013.  And in June this year two mature elms in Hove succumbed to the disease within a few days of each other and had to be felled.

But why do I care so much about elm trees?

There are many reasons why urban trees in general are important:

 They reduce pollution
 They provide habitats to insects, birds and other wildlife
 They improve health and wellbeing
 They make people feel good
 They reduce crime
 They ‘breathe in’ carbon dioxide, reducing levels of carbon in the atmosphere

And on top of all this, elm trees are rare, beautiful trees.  We’ve lost so many, but we’ve still got a fine collection due to the hard work of many people over a number of decades.  Isn’t that worth something?  Shouldn’t we be protecting each and every healthy mature elm in the city?

According to the City Council’s Arboricultural Section, we should at least be protecting this one.  This is what they have to say (p170):

The Arboricultural Section objects to the loss of the Elm tree.
5.20 This site is situated within the College Conservation Area. There are no Tree Preservation Orders on the site however the College has always maintained their trees to a high degree and the Arboricultural Section has never considered further protection of the trees necessary.
5.21 There is no doubt that this tree is worthy of Preservation Order as well as helping to make up the National Elm Collection, of which the City is very proud.
5.22 The Arboricultural report submitted with the application states that the tree is 20 metres high has been categorised as a B2 (meaning it is of moderate quality) with an estimated remaining contribution to the area of 20 – 40 years. The comments state it is “one of two mature Elms growing centrally within the College. Broad spreading specimen and considered a noteworthy feature within the grounds. Good height clearance over surrounding area.” The Arboricultural Section concurs with this.
5.23 At the time of the inspecting officer’s visit, there was minor deadwood in the canopy which could be pruned out. Apart from this, the tree appeared to be healthy with no major defects.
5.24 The tree is situated in a tarmac car parking area with a grass slope to the west. The tarmac is ruptured and this is likely to have been caused by the tree roots. There are already some buildings within the root protection area of the tree.
5.25 The proposed development sits at a lower level than the current parking area and buildings. The cutting away of the area west of the tree (including the grass slope) to facilitate the proposed development means that structural roots are likely to be severed and the structural integrity of the tree cannot be guaranteed and therefore it would be advisable to fell the tree if the development is required.
5.26 The felling of this tree is not acceptable to the Arboricultural Section and therefore would recommend that this application is refused permission.

I think it’s worth noting that this is a conservation area, and the only reason the tree does not have a Tree Preservation Order on it is because Brighton College have previously looked after their trees very well so the Arboricultural Section didn’t think it necessary to issue TPOs on the trees within the College Conservation Area.

But ultimately it’s not the fact that it’s a conservation area, or that the tree is an elm, or that the tree is rare, or that the tree is an important habitat and carbon sink… the biggest reason I object to this tree being felled is that it gives the wrong lesson to the next generation.  We have an ecological disaster unfolding in front of us, where the scale of habitat loss and climate change puts us as a species at risk for the first time in our history.  If we are to successfully overcome the challenge we face we need young people to have a strong idea of what’s important.  Trees are the givers of life: they provide the air that we breathe, they provide habitats, mental wellbeing, shade when we need it, a sense of community, a sense of continuity… they are precious.

This afternoon councillors on the planning committee have a choice: either you teach our young people that trees are expendable, that if they’re in the way they should just be chopped down.. or you teach them that trees are important, that they ought to be valued, appreciated, and protected.

Brighton College is a top-end educational establishment, and many of the young people there will be in positions of influence in the future.  Do we want those people to view the living world around us as nothing more than a bit of decoration; or do we want them to value it properly, to recognise that we are ultimately dependent on it for life itself?

The elm tree at Seven Dials: originally under threat, the tree was saved after the local community rallied together and the true value of the tree became clear. Plans were altered to allow the tree to stay.

Straw poll: What do you think?

What you can do:

1. Email the planning committee to make your concerns known.  Keep it short and sweet and ask them how they plan to vote.  Click here for members’ contact details

4. Tweet @Brightoncollege and tell them to save the tree – for the kids, for the future.